Aiguille du Chardonnet is one of the most aesthetically pleasing peaks in the Mont Blanc range. It is also one that neither Nick nor I had set foot on. There are many routes up its north face with the Migot Spur being the most classic option. This is what I had my eyes set on. We arrived at Le Tour about 15:30 on friday afternoon and as I set off on the cable car Nick started the grueling 3 hour trek straight up to the Albert 1er refuge. I took the rope as I only had about 500m vertical and just over a hour of walking in front of me. When we arrived at the refuge it was clear that the builders who are working on the new summer refuge didn’t want climbers waking them up at 3am so after some food we set off onto the cloudy glacier to find a bivi spot closer to the start of the route. We found a small outcrop of rocks about 45 mins walk from the refuge and set up camp there. Awaking at 3am to clouds we had a little doze until I shot up at 4am with stars lighting up the sky. Shaking Nick up we had a quick coffee and we on our way at 4:30am. 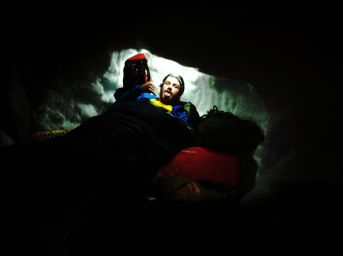 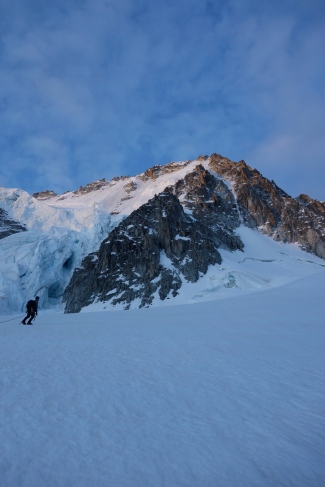 Nick below the Migot Spur

We arrived at the Bergschrund just before 6am and this gave us 6 hours before the storm was forecast to roll in. We had to get a move on. The initial mixed ground was easy to cover and we made fast work of the first snow arete. Hitting some deep slushy snow before the steeper mixed ground this did take its toll on Nick and added some more time on the accent. We took the left hand route below the serac as there was a nice streak of ice. This was a relief after the soft snow and we had no problems flying up the 70/80′ ice gully. A brief period was spend climbing under the serac but it was still cold and didn’t have much sun hitting it so we avoided any potential problems. We had made the upper snow field before 9am so we were on target for a 10am summit. This last snow slope seemed to go on forever. I led it with fast 10m bursts followed by a few minutes of heavy breathing and swearing. We were so close. The wind was picking up and the clouds coming in so we dug deep and continued on to the summit ridge. A few meters of rock and we were there. Another great summit to add to the list. 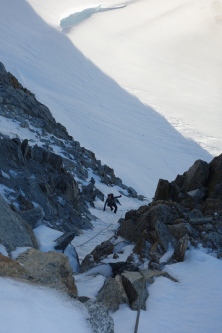 Taking a break at 8am

We spent a few minutes celebrating on the summit before making a speedy scramble along the highly exposed ridge in gale force winds to find the decent route. I came across a couloir with foot steps in and went for it. Quickly finding some tat we started rappelling. We ended up not on the right descent route but going down a climbing route. After 6 30m abseils on some dodgy gear, one piton I pulled out before hammering it back in solid, we could see the normal descent route. To get to it involved crossing a 10m wide icy couloir and by this point it was blowing a gale and snowing quite heavily. We wanted to get down. Nick led across on belay and then I seconded. It felt like winter with the blizzard and it made finding the cairns tricky. A 20 second window allowed me to spot the next ab station and I went for it. Communicating with Nick at this point was hopeless. He could not see me and I could barely hear myself let alone him over 30meters away. With a few big tugs on the rope he came down to me and we could make the last 4 30m raps. With the gale still blowing the sun came back out and we finally made it on to the glacier. There were 2 more 30m raps to get over the schrund and we then ran down to our bivi to get out of the wind and rest for ten minutes. 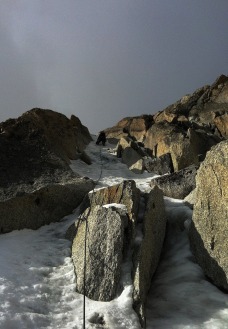 Ice below the upper snow arete

Nick on the summit

Moving along the ridge to decend

Finding the abseils in a blizzard

Staying warm in the wind 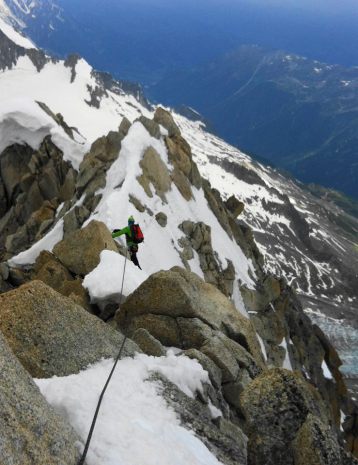 Rapping for the last time

Packing up our gear we had just over one hour to get to the Le Tour mid station to make our descent easier. Nick took the heavy wet rope for the first half then I had it to the lift. My feet were in agony from the 2000m descent and I was happy to get on the lift, Nick was also as he had no lift pass but the Lifty saw the exhausted look on his face and let him on for free. We had been on the go for over 12 hours and climbing for 10. We wanted nothing more than a feast as we had only had coffee and a couple of chocolate bars all day. Straight to the shops for pizza and milkshakes. What a day, it was so close to becoming an epic but with the correct decision making we made it down safely. This was my second time climbing with Nick and I think we make a good team. I hope to get back into the mountains with him soon.

Here is a quick video I made of the route.

This classic granite ridge seamed with clean cut cracks offers great climbing in exceptional surroundings. Situated at the base of the Aiguille du Peigne it covers over 250m of vertical height with the grades topping out at 5c+. I very rarely climb rock as I am bored with the valley crags and have little experience with alpine trad. Teaming up with Emily in preparation for our Krygyzstan trip we started early at the Midi so that we would have plenty of time before the afternoon showers and cloud rolled in. With its close proximity to the mid station we were at the base of the route within the hour and started up the easier lower climbing before hitting the first small wall where we roped up. The route follows a series of 4 towers with their being a difficulty on every one but the first. Within 15m minutes of climbing the route the clouds came in and we could feel a few drops of rain. We waited it out on a small ledge for 30 mins hoping that it would stop so we could continue, as we were close to the point of no return. The sun came back out and we carried on up the ridge climbing mostly 4c. Over the 1st tower and onto some harder pitches. There was a very exposed step across onto the first 5b slab and it was a shock for me. Glad Emily led the entire route as I had difficulties climbing the 5b and 5c+ let alone placing gear as I went. Over the 2nd tower we could sit in the sun for a little and enjoy the views, before tackling the crux wall. Emily started up the cracked slabs before coming to the hard move. Placing a cam high up in a crack before moving around a corner it created a lot of rope drag that left her, and me, not feeling confident. She would ask for slack and no matter how much I would pay out she would still be pulling on the rope. Fair play to her she made it up and over and was glad to find some bolts. Now it was my turn. As she started pulling in the excess rope I started coiling it up as with the drag it was taking a long time. For the first half of the pitch I did have a lot of slack but the climbing was relatively easy so no bother. I did wait when it came to the overhanging slabs so she could keep the rope tight. Even though I pulled on an in-situ sling it was still one of the hardest pitches of climbing I had done. Exposed and awkward with a slack rope! On to the 4th tower. Just as Emily was half way up the 5c slab it started to rain. I was next. With this tricky slab that required a lot of smearing I had a nightmare. It was very greasy and wet and my hands were freezing with no chalk left in my bag. Probably some of the worst climbing I have done. We were glad to get this last slab out of the way as it led to a small traverse and we were at the raps. One 30m rap brought you to the exit couloir that was fairly dry, maybe 20m of snow to downclimb. Back to the midi for about 3:30 and we were happy. Slabs, cracks and smiles.

Emily about to take shelter from the rain

On the lower cracked slabs

me on a corner pitch

Half way up the 2nd tower

Starting up the crux pitch

Snow in the exit gully

Going back to Wales at the end of May I knew that it would mean the end of another winter skiing. Seeing what I was missing on the internet was annoying but finishing on the Col du Plan NF was an amazing end to a exceptional winter.

Upon my return to Chamonix I was keen to start my training for an expedition to the Tien Shan mountains in Krygyzstan in September with Emily, Dave and a few others. When asked to join I was nervous as I have never done anything like this, but knowing that it could be the adventure of a lifetime and a chance to climb some previously unclimbed 5000m+ peaks and routes I could not say no.  Flights have been booked and I have started to put in the work to make it a succesful trip.

With some great weather and equally good conditions it has been easy to get up high and get some easy routes in such as Point Lachenal traverse and Cosmiques arete. These are quick and in close proximity to the Midi and they can both be done in a little over two hours. Great to get something done in the morning before most people are out of bed. I am planning more big routes for this summer and a lot of training. Keep checking back for more condition updates and trip reports.