Since I made my way 2/3rds of the way up the Rebuffat-Terray route last week with Tom Grant I have been keen to get in some more mixed routes before the snow starts to fall and stick, and the approaches get longer; The Aiguille du Midi closes in the first week of November.

I had heard that a couple of my friends Alex and Ally had climbed Vent du Dragon on the north face of the Cosmiques Arete and after Tom had also climbed it last week and said it was in good condition I thought that could be my next objective.

On Tuesday I bumped in to James Clapham, a very strong climber who took my up my first Alpine climb, Aiguille du tour-Table couloir, over a year ago. He mentioned that he is heading for work in Scotland on Saturday and was keen to get on one last route before he leaves. 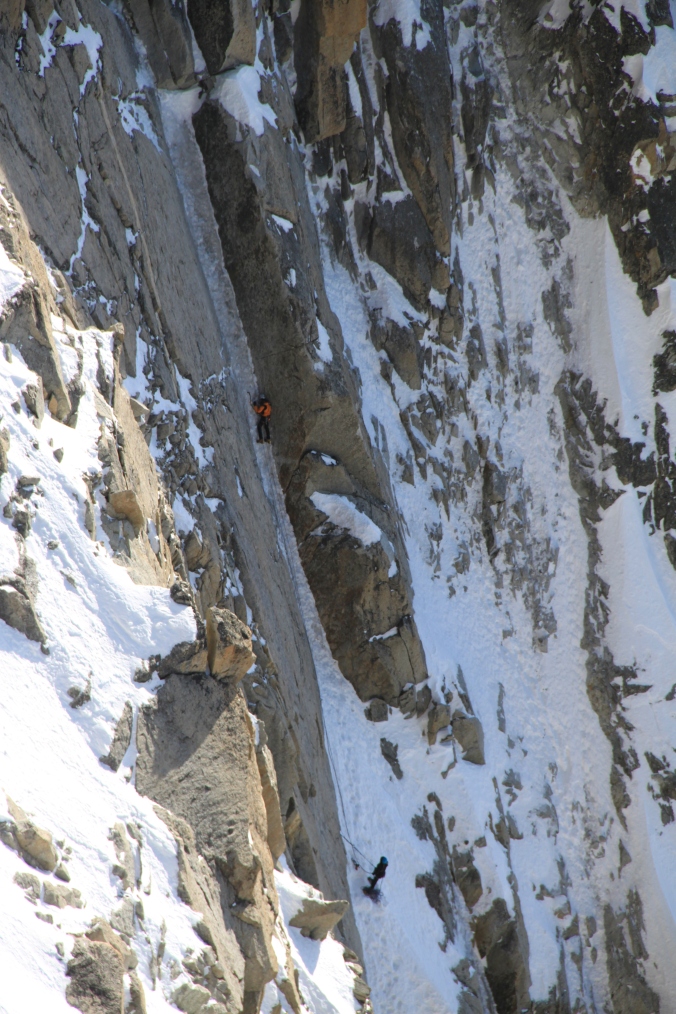 Meeting at the Midi at 8:15 there was a lot of climbers who already had their helmets on and looked ready to go, this was a good sign that they were going to rap of the bridge and head to the same route we were going for.

We tried to be quick out of the bin and down the tunnel but despite our speed there were at least 6 teams ready to rap. Vent du Dragon was out of the question!

Climbing for me is fun, I don’t want to get involved with 12 or so people trying to get on the same route then having ice and spindrift hailing from above for the whole climb!

As I was up the Midi the day before scouting routes and checking conditions I suggested the ‘Shit Route’. I had heard about it before and had a good idea of the route; Emily had climbed it last month. It gets its name because the top pitch of ice is made from the overflow of the toilets, or so I’m told! 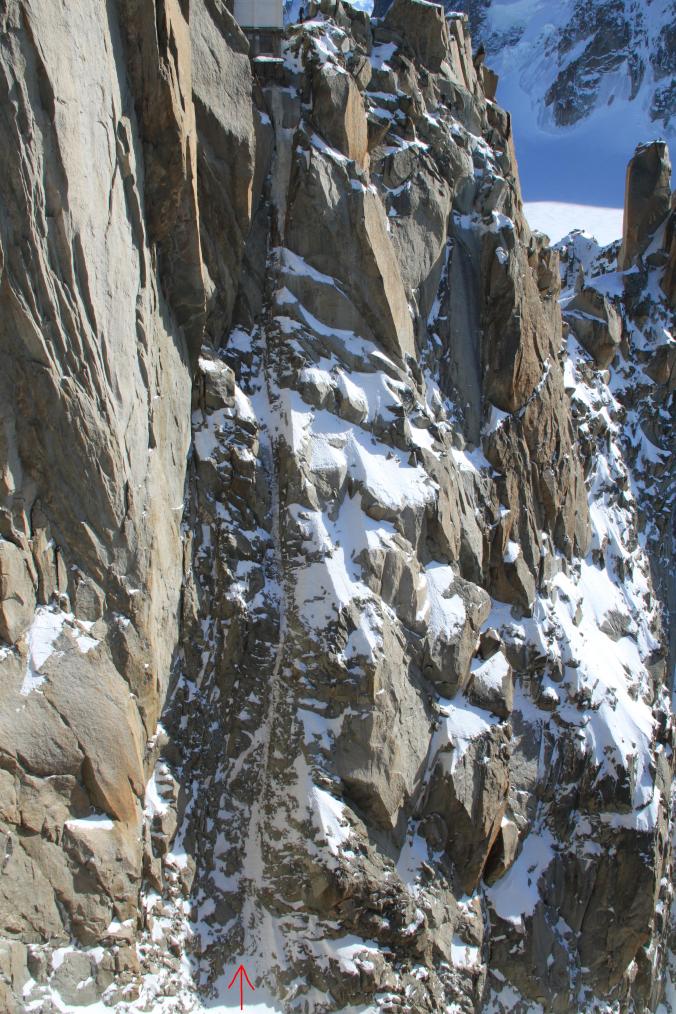 The ‘Shit Route’ is the obvious gully starting up from the red arrow and finishing on the hanging ice.

There was only one team on the platform when we went to rap down the route and they took their time so we started rapping down the route. There are 2 50m rappels to the bottom of the 100m mixed gully. James did have to climb back up 10m after the first rap as the rope became stuck in a crack.

After James had built a belay and I had joined him we started the climb. With the steep icy granite walls all around you get a true north face atmosphere.

James started up the first mixed pitch with no real difficulties.

I then came up second, this was some of the hardest mixed climbing that I had done but I felt safe on top rope and really enjoyed the climbing.

Meeting again at the belay there was only one pitch left to climb.

The next pitch was slightly harder with some difficult moves near the top, finishing on 15m of 85’ water ice which had a distinct smell of toilet water and cleaning products.

As James was nearing the top of the Ice he knocked down what he thought was either frozen turf, or a frozen turd. Whatever it was it hit me on the knee and drew blood through my soft-shell trousers. James then finished the ice and was onto the metal platform and started setting up a belay for me to second.

I was quick seconding the first 20m then I hit the steep mixed ground before the ice which I found much harder than the lower section. I had one new pick on my Quarks, Snell had only one in stock and after reading my last blog my Dad decided that I could use some new ones for my birthday, I wish they had 2 in stock! Before you got on to the hanging ice there was an awkward step over some large rock bulges and you had to get some high axe holds over the ice and then pull yourself up and over, it was daunting and hard but I made it over without falling just breaking a big sweat.

I was now on the 85’ ice and my calves were burning, James wanted me to stop for a photo and I gave him one second before moving again, so I could get off my front points and rest my legs. I was up on the Cosmiques ridge and into the sun and I could relax.

We were 2 hours on the climb plus 30 mins for the 2 rappels down. We were chuffed that we had managed to climb something even after our first choice was a no go. Finishing at midday you could still see many teams on the Vent du Dragon and I was glad not to be stuck in the thick of it on hat route with all those climbers.

Thanks to James for the climb and some photos and my Dad for the new pick(s)!